Deleting a range of keys is a common pattern in RocksDB. Most systems built on top of RocksDB have multi-component key schemas, where keys sharing a common prefix are logically related. Here are some examples.

MyRocks is a MySQL fork using RocksDB as its storage engine. Each key’s first four bytes identify the table or index to which that key belongs. Thus dropping a table or index involves deleting all the keys with that prefix.

Rockssandra is a Cassandra variant that uses RocksDB as its storage engine. One of its admin tool commands, nodetool cleanup, removes key-ranges that have been migrated to other nodes in the cluster.

Marketplace uses RocksDB to store product data. Its key begins with product ID, and it stores various data associated with the product in separate keys. When a product is removed, all these keys must be deleted.

When we decide what to improve, we try to find a use case that’s common across users, since we want to build a generally useful system, not one that has many one-off features for individual users. The range deletion pattern is common as illustrated above, so from this perspective it’s a good target for optimization.

The most common pattern we see is scan-and-delete, i.e., advance an iterator through the to-be-deleted range, and issue a Delete for each key. This is slow (involves read I/O) so cannot be done in any critical path. Additionally, it creates many tombstones, which slows down iterators and doesn’t offer a deadline for space reclamation.

Another common pattern is using a custom compaction filter that drops keys in the deleted range(s). This deletes the range asynchronously, so cannot be used in cases where readers must not see keys in deleted ranges. Further, it has the disadvantage of outputting tombstones to all but the bottom level. That’s because compaction cannot detect whether dropping a key would cause an older version at a lower level to reappear.

If space reclamation time is important, or it is important that the deleted range not affect iterators, the user can trigger CompactRange on the deleted range. This can involve arbitrarily long waits in the compaction queue, and increases write-amp. By the time it’s finished, however, the range is completely gone from the LSM.

DeleteFilesInRange can be used prior to compacting the deleted range as long as snapshot readers do not need to access them. It drops files that are completely contained in the deleted range. That saves write-amp because, in CompactRange, the file data would have to be rewritten several times before it reaches the bottom of the LSM, where tombstones can finally be dropped.

In addition to the above approaches having various drawbacks, they are quite complicated to reason about and implement. In an ideal world, deleting a range of keys would be (1) simple, i.e., a single API call; (2) synchronous, i.e., when the call finishes, the keys are guaranteed to be wiped from the DB; (3) low latency so it can be used in critical paths; and (4) a first-class operation with all the guarantees of any other write, like atomicity, crash-recovery, etc.

v1: Getting it to work

Where to persist them?

The first place we thought about storing them is inline with the data blocks. We could not think of a good way to do it, however, since the start of a range tombstone covering a key could be anywhere, making binary search impossible. So, we decided to investigate segregated storage.

A second solution we considered is appending to the manifest. This file is append-only, periodically compacted, and stores metadata like the level to which each SST belongs. This is tempting because it leverages an existing file, which is maintained in the background and fully read when the DB is opened. However, it conceptually violates the manifest’s purpose, which is to store metadata. It also has no way to detect when a range tombstone no longer covers anything and is droppable. Further, it’d be possible for keys above a range tombstone to disappear when they have their seqnums zeroed upon compaction to the bottommost level.

A third candidate is using a separate column family. This has similar problems to the manifest approach. That is, we cannot easily detect when a range tombstone is obsolete, and seqnum zeroing can cause a key to go from above a range tombstone to below, i.e., disappearing. The upside is we can reuse logic for memory buffering, consistent reads/writes, etc.

The problems with the second and third solutions indicate a need for range tombstones to be aware of flush/compaction. An easy way to achieve this is put them in the SST files themselves - but not in the data blocks, as explained for the first solution. So, we introduced a separate meta-block for range tombstones. This resolved the problem of when to obsolete range tombstones, as it’s simple: when they’re compacted to the bottom level. We also reused the LSM invariants that newer versions of a key are always in a higher level to prevent the seqnum zeroing problem. This approach has the side benefit of constraining the range tombstones seen during reads to ones in a similar key-range.

When there are range tombstones in an SST, they are segregated in a separate meta-block 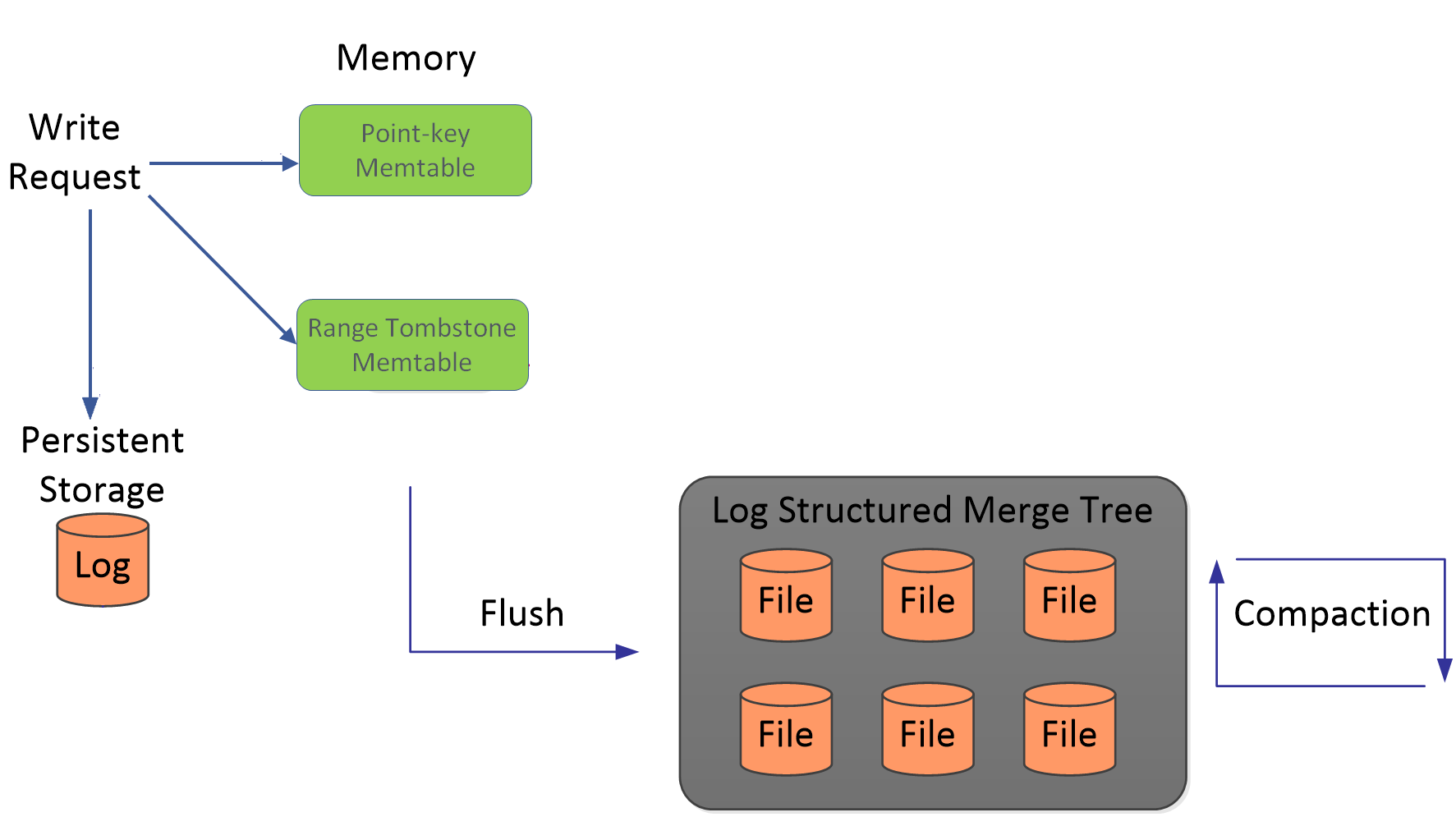 Lifetime of point keys and range tombstones in RocksDB

During flush and compaction, we chose to write out all non-obsolete range tombstones unsorted. Sorting by a single dimension is easy to implement, but doesn’t bring asymptotic improvement to queries over range data. Ideally, we want to store skylines (see “Read Path” subsection below) computed over our ranges so we can binary search. However, a couple of concerns cause doing this in flush and compaction to feel unsatisfactory: (1) we need to store multiple skylines, one for each snapshot, which further complicates the range tombstone meta-block encoding; and (2) even if we implement this, the range tombstone memtable still needs to be linearly scanned. Given these concerns we decided to defer collapsing work to the read side, hoping a good caching strategy could optimize this at some future point.

In point lookups, we aggregate range tombstones in an unordered vector as we search through live memtable, immutable memtables, and then SSTs. When a key is found that matches the lookup key, we do a scan through the vector, checking whether the key is deleted.

In iterators, we aggregate range tombstones into a skyline as we visit live memtable, immutable memtables, and SSTs. The skyline is expensive to construct but fast to determine whether a key is covered. The skyline keeps track of the most recent range tombstone found to optimize Next and Prev.

(Image source: Leetcode) The skyline problem involves taking building location/height data in the unsearchable form of A and converting it to the form of B, which is binary-searchable. With overlapping range tombstones, to achieve efficient searching we need to solve an analogous problem, where the x-axis is the key-space and the y-axis is the sequence number.

For the v1 implementation, writes are much faster compared to the scan and delete (optionally within a transaction) pattern. DeleteRange only logs to WAL and applies to memtable. Logging to WAL always fflushes, and optionally fsyncs or fdatasyncs. Applying to memtable is always an in-memory operation. Since range tombstones have a dedicated skiplist memtable, the complexity of inserting is O(log(T)), where T is the number of existing buffered range tombstones.

Reading in the presence of v1 range tombstones, however, is much slower than reads in a database where scan-and-delete has happened, due to the linear scan over range tombstone memtables/meta-blocks.

Iterating in a database with v1 range tombstones is usually slower than in a scan-and-delete database, although the gap lessens as iterations grow longer. When an iterator is first created and seeked, we construct a skyline over its tombstones. This operation is O(T*log(T)) where T is the number of tombstones found across live memtable, immutable memtable, L0 files, and one file from each of the L1+ levels. However, moving the iterator forwards or backwards is simply a constant-time operation (excluding edge cases, e.g., many range tombstones between consecutive point keys).

DeleteRange’s negative impact on read perf is a barrier to its adoption. The root cause is range tombstones are not stored or cached in a format that can be efficiently searched. We needed to design DeleteRange so that we could maintain write performance while making read performance competitive with workarounds used in production (e.g., scan-and-delete).

The key idea of the redesign is that, instead of globally collapsing range tombstones, we can locally “fragment” them for each SST file and memtable to guarantee that:

When an SST file is opened, its range tombstones are fragmented and cached. For point lookups, we binary search each file’s fragmented range tombstones for one that covers the lookup key. Unlike the old design, once we find a tombstone, we no longer need to search for the key in lower levels, since we know that any keys on those levels will be covered (though we do still check the current level since there may be keys written after the range tombstone).

To understand the performance of this new design, we used db_bench to compare point lookup, short range scan, and long range scan performance across:

In these benchmarks, we used a database with 5 million data keys, and 10000 range tombstones (ignoring those dropped during compaction) that were written in regular intervals after 4.5 million data keys were written. Writing the range tombstones ensures that most of them are not compacted away, and we have more tombstones in higher levels that cover keys in lower levels, which allows the benchmarks to exercise more interesting behavior when reading deleted keys.

The results are summarized in the tables below, averaged over 10 runs (note the different SHAs for v1 benchmarks are due to a new db_bench flag that was added in order to compare performance with databases with no tombstones; for brevity, those results are not reported here). Also note that the block cache was large enough to hold the entire db, so the large throughput is due to limited I/Os and little time spent on decompression. The range tombstone blocks are always pinned uncompressed in memory. We believe these setup details should not affect relative performance between versions.

Another future optimization is to create a new format version that requires range tombstones to be stored in a fragmented form. This would save time when opening SST files, and when max_open_files is not -1 (i.e., files may be opened several times).

Special thanks to Peter Mattis and Nikhil Benesch from Cockroach Labs, who were early users of DeleteRange v1 in production, contributed the cleanest/most efficient v1 aggregation implementation, found and fixed bugs, and provided initial DeleteRange v2 design and continued help.

Thanks to Huachao Huang and Jinpeng Zhang from PingCAP for early DeleteRange v1 adoption, bug reports, and fixes.