RocksDB provides several APIs to read KV pairs from a database, including Get and MultiGet for point lookups and Iterator for sequential scanning. These APIs may result in RocksDB reading blocks from SST files on disk storage. The types of blocks and the frequency with which they are read from storage is workload dependent. Some workloads may have a small working set and thus may be able to cache most of the data required, while others may have large working sets and have to read from disk more often. In the latter case, the latency would be much higher and throughput would be lower than the former. They would also be dependent on the characteristics of the underlying storage media, making it difficult to migrate from one medium to another, for example, local flash to disaggregated flash.

One way to mitigate the impact of storage latency is to read asynchronously and in parallel as much as possible, in order to hide IO latency. We have implemented this in RocksDB in Iterators and MultiGet. In Iterators, we prefetch data asynchronously in the background for each file being iterated on, unlike the current implementation that does prefetching synchronously, thus blocking the iterator thread. In MultiGet, we determine the set of files that a given batch of keys overlaps, and read the necessary data blocks from those files in parallel using an asynchronous file system API. These optimizations have significantly decreased the overall latency of the RocksDB MultiGet and iteration APIs on slower storage compared to local flash.

The optimizations described here are in the internal implementation of Iterator and MultiGet in RocksDB. The user API is still synchronous, so existing code can easily benefit from it. We might consider async user APIs in the future.

A new flag in ReadOptions, async_io, controls the usage of async IO. This flag, when set, enables async IO in Iterators and MultiGet. For MultiGet, an additional ReadOptions flag, optimize_multiget_for_io (defaults to true), controls how aggressively to use async IO. If the flag is not set, files in the same level are read in parallel but not different levels. If the flag is set, the level restriction is removed and as many files as possible are read in parallel, regardless of level. The latter might have a higher CPU cost depending on the workload.

At the FileSystem layer, we use the FSRandomAccessFile::ReadAsync API to start an async read, providing a completion callback.

A RocksDB scan usually involves the allocation of a new iterator, followed by a Seek call with a target key to position the iterator, followed by multiple Next calls to iterate through the keys sequentially. Both the Seek and Next operations present opportunities to read asynchronously, thereby reducing the scan latency.

A scan usually involves iterating through keys in multiple entities - the active memtable, sealed and unflushed memtables, every L0 file, and every non-empty non-zero level. The first two are completely in memory and thus not impacted by IO latency. The latter two involve reading from SST files. This means that an increase in IO latency has a multiplier effect, since multiple L0 files and levels have to be iterated on.

Some factors, such as block cache and prefix bloom filters, can reduce the number of files to iterate and number of reads from the files. Nevertheless, even a few reads from disk can dominate the overall latency. RocksDB uses async IO in both Seek and Next to mitigate the latency impact, as described below.

A RocksDB iterator maintains a collection of child iterators, one for each L0 file and for each non-empty non-zero levels. For a Seek operation every child iterator has to Seek to the target key. This is normally done serially, by doing synchronous reads from SST files when the required data blocks are not in cache. When the async_io option is enabled, RocksDB performs the Seek in 2 phases - 1) Locate the data block required for Seek in each file/level and issue an async read, and 2) in the second phase, reseek with the same key, which will wait for the async read to finish at each level and position the table iterator. Phase 1 reads multiple blocks in parallel, reducing overall Seek latency.

For the iterator Next operation, RocksDB tries to reduce the latency due to IO by prefetching data from the file. This prefetching occurs when a data block required by Next is not present in the cache. The reads from file and prefetching is managed by the FilePrefetchBuffer, which is an object that’s created per table iterator (BlockBasedTableIterator). The FilePrefetchBuffer reads the required data block, and an additional amount of data that varies depending on the options provided by the user in ReadOptions and BlockBasedTableOptions. The default behavior is to start prefetching on the third read from a file, with an initial prefetch size of 8KB and doubling it on every subsequent read, upto a max of 256KB.

While the prefetching in the previous paragraph helps, it is still synchronous and contributes to the iterator latency. When the async_io option is enabled, RocksDB prefetches in the background, i.e while the iterator is scanning KV pairs. This is accomplished in FilePrefetchBuffer by maintaining two prefetch buffers. The prefetch size is calculated as usual, but its then split across the two buffers. As the iteration proceeds and data in the first buffer is consumed, the buffer is cleared and an async read is scheduled to prefetch additional data. This read continues in the background while the iterator continues to process data in the second buffer. At this point, the roles of the two buffers are reversed. This does not completely hide the IO latency, since the iterator would have to wait for an async read to complete after the data in memory has been consumed. However, it does hide some of it by overlapping CPU and IO, and async prefetch can be happening on multiple levels in parallel, further reducing the latency.

The MultiGet API accepts a batch of keys as input. Its a more efficient way of looking up multiple keys compared to a loop of Gets. One way MultiGet is more efficient is by reading multiple data blocks from an SST file in a batch, for keys in the same file. This greatly reduces the latency of the request, compared to a loop of Gets. The MultiRead FileSystem API is used to read a batch of data blocks. 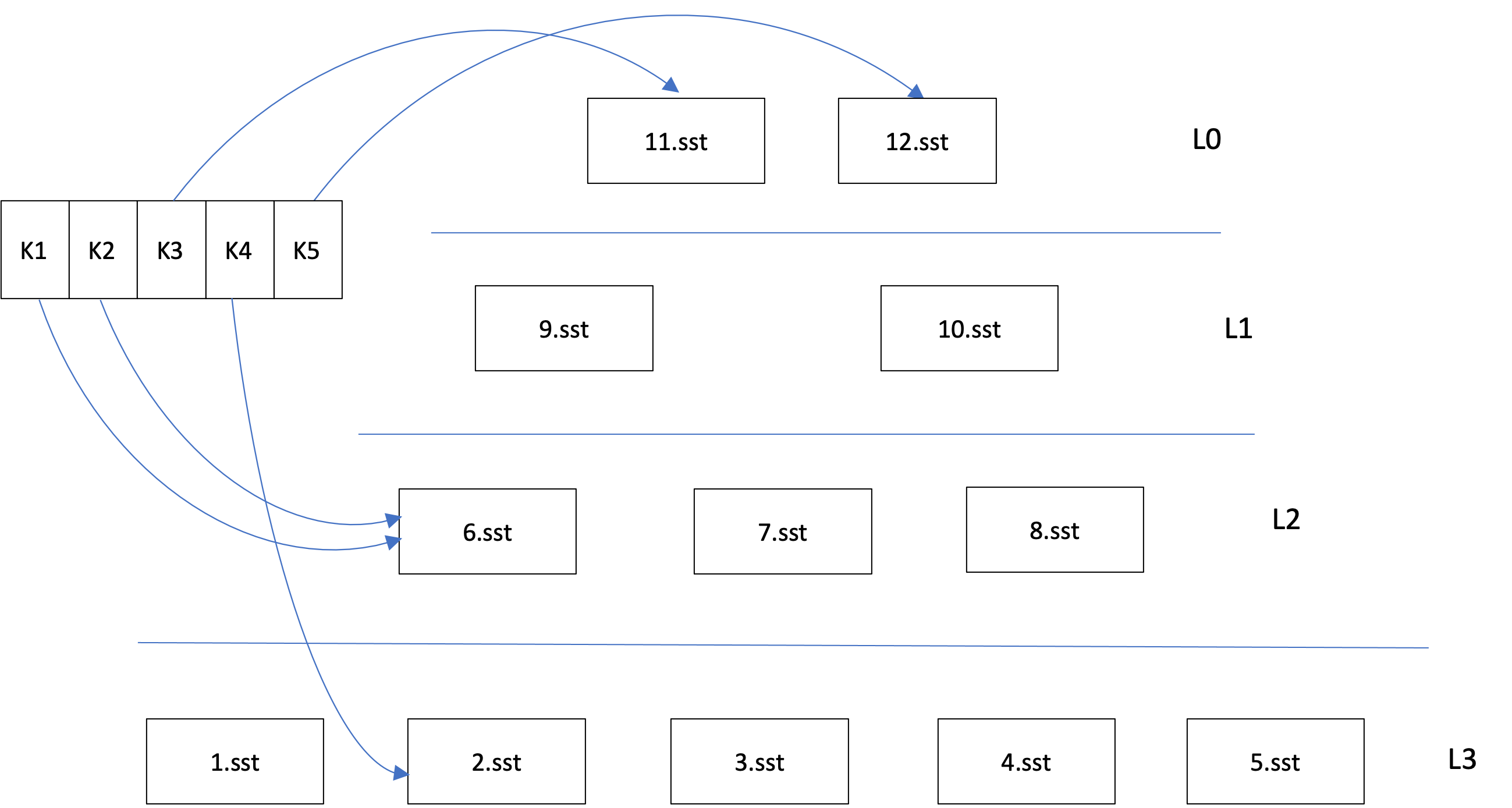 Even with the MultiRead optimization, subset of keys that are in different files still need to be read serially. We can take this one step further and read multiple files in parallel. In order to do this, a few fundamental changes were required in the MultiGet implementation -

Command used to generate the database:

Structure of the database:

The default MultiGet implementation of reading from one file at a time had a latency of 1292 micros/op.

With all optimizations turned on, MultiGet had the lowest latency of 508 micros/op.

These optimizations apply only to block based table SSTs. File system support for the ReadAsync and Poll interfaces is required. Currently, it is available only for PosixFileSystem.

The MultiGet async IO optimization has a few additional limitations -