BlobDB is essentially RocksDB for large-value use cases. The basic idea, which was proposed in the WiscKey paper, is key-value separation: by storing large values in dedicated blob files and storing only small pointers to them in the LSM tree, we avoid copying the values over and over again during compaction, thus reducing write amplification. Historically, BlobDB supported only FIFO and TTL based use cases that can tolerate some data loss. In addition, it was incompatible with many widely used RocksDB features, and required users to adopt a custom API. In 2020, we decided to rearchitect BlobDB from the ground up, taking the lessons learned from WiscKey and the original BlobDB but also drawing inspiration and incorporating ideas from other similar systems. Our goals were to eliminate the above limitations and to create a new integrated version that enables customers to use the well-known RocksDB API, has feature parity with the core of RocksDB, and offers better performance. This new implementation is now available and provides the following improvements over the original:

The new BlobDB can be configured (on a per-column family basis if needed) simply by using the following options:

The above options are all dynamically adjustable via the SetOptions API; changing them will affect subsequent flushes and compactions but not ones that are already in progress.

In addition to the above, consider tuning the following non-BlobDB specific options:

As mentioned above, the new BlobDB now also supports compaction filters. Key-value separation actually enables an optimization here: if the compaction filter of an application can make a decision about a key-value solely based on the key, it is unnecessary to read the value from the blob file. Applications can take advantage of this optimization by implementing the new FilterBlobByKey method of the CompactionFilter interface. This method gets called by RocksDB first whenever it encounters a key-value where the value is stored in a blob file. If this method returns a “final” decision like kKeep, kRemove, kChangeValue, or kRemoveAndSkipUntil, RocksDB will honor that decision; on the other hand, if the method returns kUndetermined, RocksDB will read the blob from the blob file and call FilterV2 with the value in the usual fashion.

We tested the performance of the new BlobDB for six different value sizes between 1 KB and 1 MB using a customized version of our standard benchmark suite on a box with an 18-core Skylake DE CPU (running at 1.6 GHz, with hyperthreading enabled), 64 GB RAM, a 512 GB boot SSD, and two 1.88 TB M.2 SSDs in a RAID0 configuration for data. The RocksDB version used was equivalent to 6.18.1, with some benchmarking and statistics related enhancements. Leveled and universal compaction without key-value separation were used as reference points. Note that for simplicity, we use “leveled compaction” and “universal compaction” as shorthand for leveled and universal compaction without key-value separation, respectively, and “BlobDB” for BlobDB with leveled compaction.

Our benchmarks cycled through six different workloads: two write-only ones (initial load and overwrite), two read/write ones (point lookup/write mix and range scan/write mix), and finally two read-only ones (point lookups and range scans). The first two phases performed a fixed amount of work (see below), while the final four were run for a fixed amount of time, namely 30 minutes each. Each phase other than the first one started with the database state left behind by the previous one. Here’s a brief description of the workloads:

Reducing write amp is the original motivation for key-value separation. Here, we follow RocksDB’s definition of write amplification (as used in compaction statistics and the info log). That is, we define write amp as the total amount of data written by flushes and compactions divided by the amount of data written by flushes, where “data written” includes SST files and blob files as well (if applicable). The following charts show that BlobDB significantly reduces write amplification for all of our (non-read only) workloads.

For the initial load, where due to the nature of the workload both leveled and universal already have a low write amp factor of 1.6, BlobDB has a write amp close to the theoretical minimum of 1.0, namely in the 1.0..1.02 range, depending on value size. How is this possible? Well, the trick is that when key-value separation is used, the full compaction step only has to sort the keys but not the values. This results in a write amp that is about 36% lower than the already low write amp you get with either leveled or universal.

In the case of the overwrite workload, BlobDB had a write amp between 1.4 and 1.7 depending on value size. This is around 75-78% lower than the write amp of leveled compaction (6.1 to 6.8) and 70-77% lower than universal (5.7 to 6.2); for this workload, there wasn’t a huge difference between the performance of leveled and universal.

When it comes to the point lookup/write mix workload, BlobDB had a write amp between 1.4 and 1.8. This is 83-88% lower than the write amp of leveled compaction, which had values between 10.8 and 12.5. Universal fared much better than leveled under this workload, and had write amp in the 2.2..6.6 range; however, BlobDB still provided significant gains for all value sizes we tested: namely, write amp was 18-77% lower than that of universal, depending on value size. 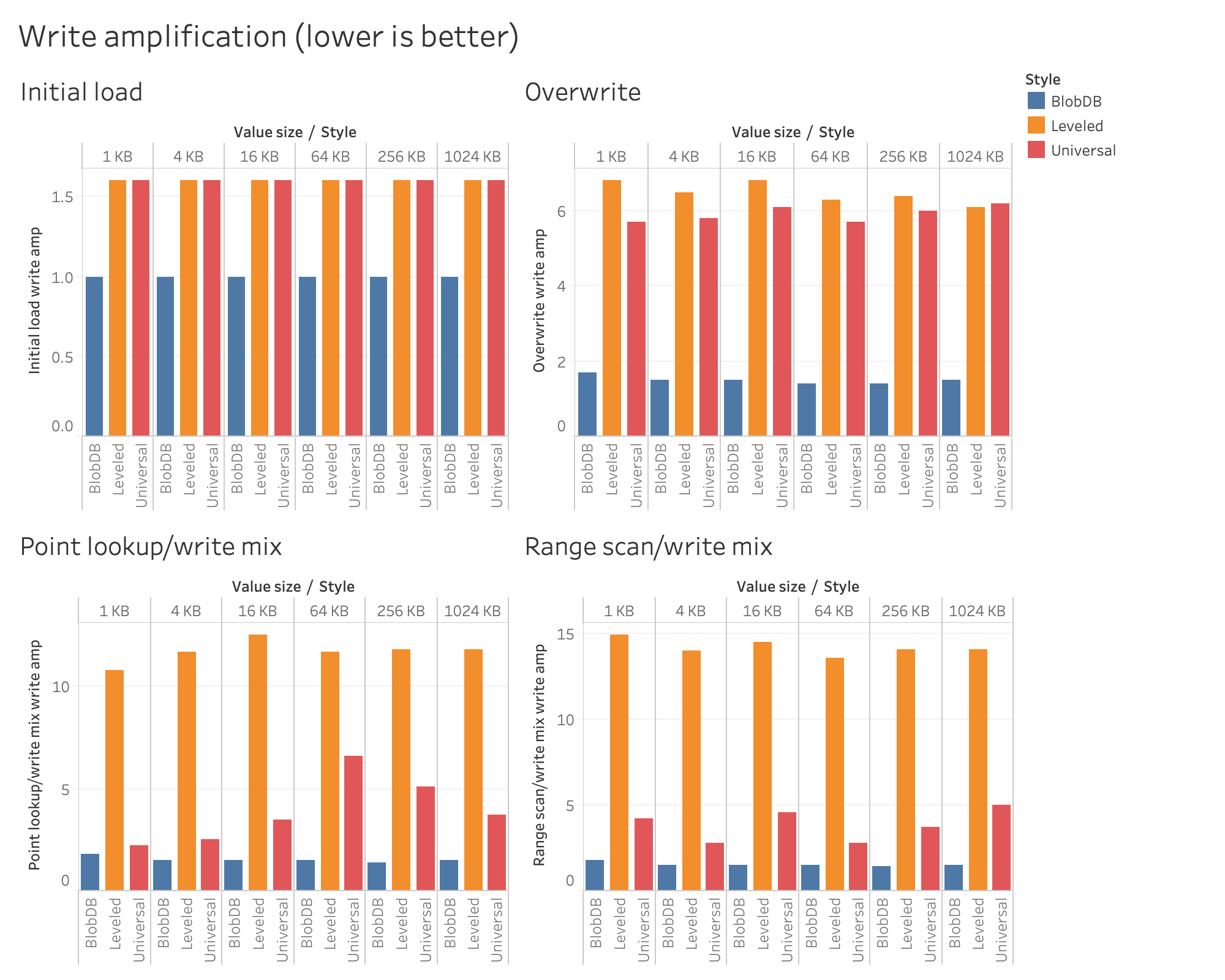 In terms of write performance, there are other factors to consider besides write amplification. The following charts show some interesting metrics for the two write-only workloads (initial load and overwrite). As discussed earlier, these two workloads perform a fixed amount of work; the two charts in the top row show how long it took BlobDB, leveled, and universal to complete that work. Note that each bar is broken down into two, corresponding to the two stages of each workload (random write and full compaction for initial load, and random write and waiting for compactions for overwrite).

For initial load, note that the random write stage takes the same amount of time regardless of which algorithm is used. This is not surprising considering the fact that compactions are disabled during this stage and thus RocksDB is simply writing L0 files (and in BlobDB’s case, blob files) as fast as it can. The second stage, on the other hand, is very different: as mentioned above, BlobDB essentially only needs to read, sort, and rewrite the keys during compaction, which can be done much much faster (with 1 MB values, more than a hundred times faster) than doing the same for large key-values. Due to this, initial load completed 2.3x to 4.7x faster overall when using BlobDB.

As for the overwrite workload, BlobDB performs much better during both stages. The two charts in the bottom row help explain why. In the case of both leveled and universal compaction, compactions can’t keep up with the write rate, which eventually leads to back pressure in the form of write stalls. As shown in the chart below, both leveled and universal stall between ~40% and ~70% of the time; on the other hand, BlobDB is stall-free except for the largest value size tested (1 MB). This naturally leads to higher throughput, namely 2.1x to 3.5x higher throughput compared to leveled, and 1.6x to 3.0x higher throughput compared to universal. The overwrite time chart also shows that the catch-up stage that waits for all compactions to finish is much shorter (and in fact, at larger value sizes, negligible) with BlobDB. 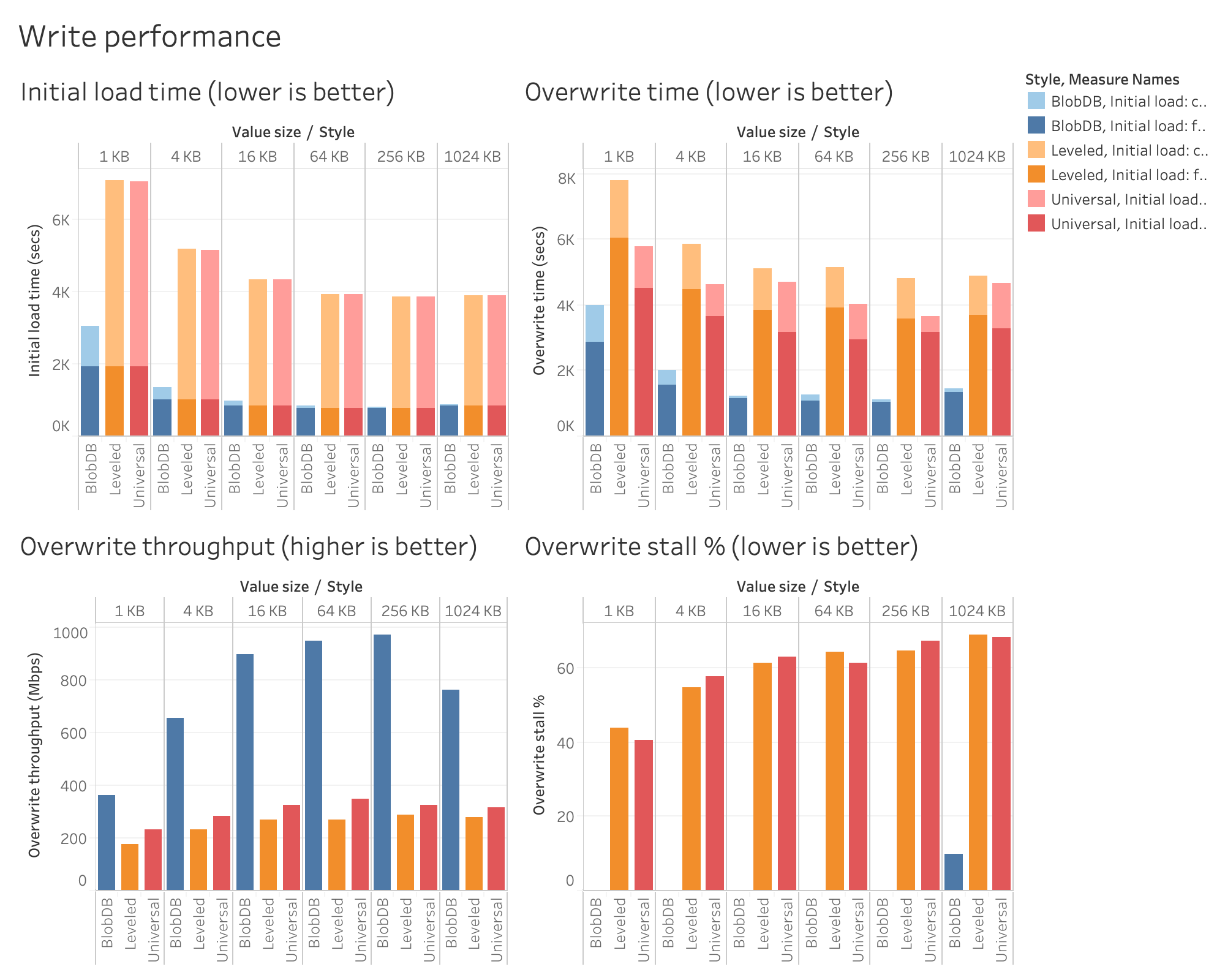 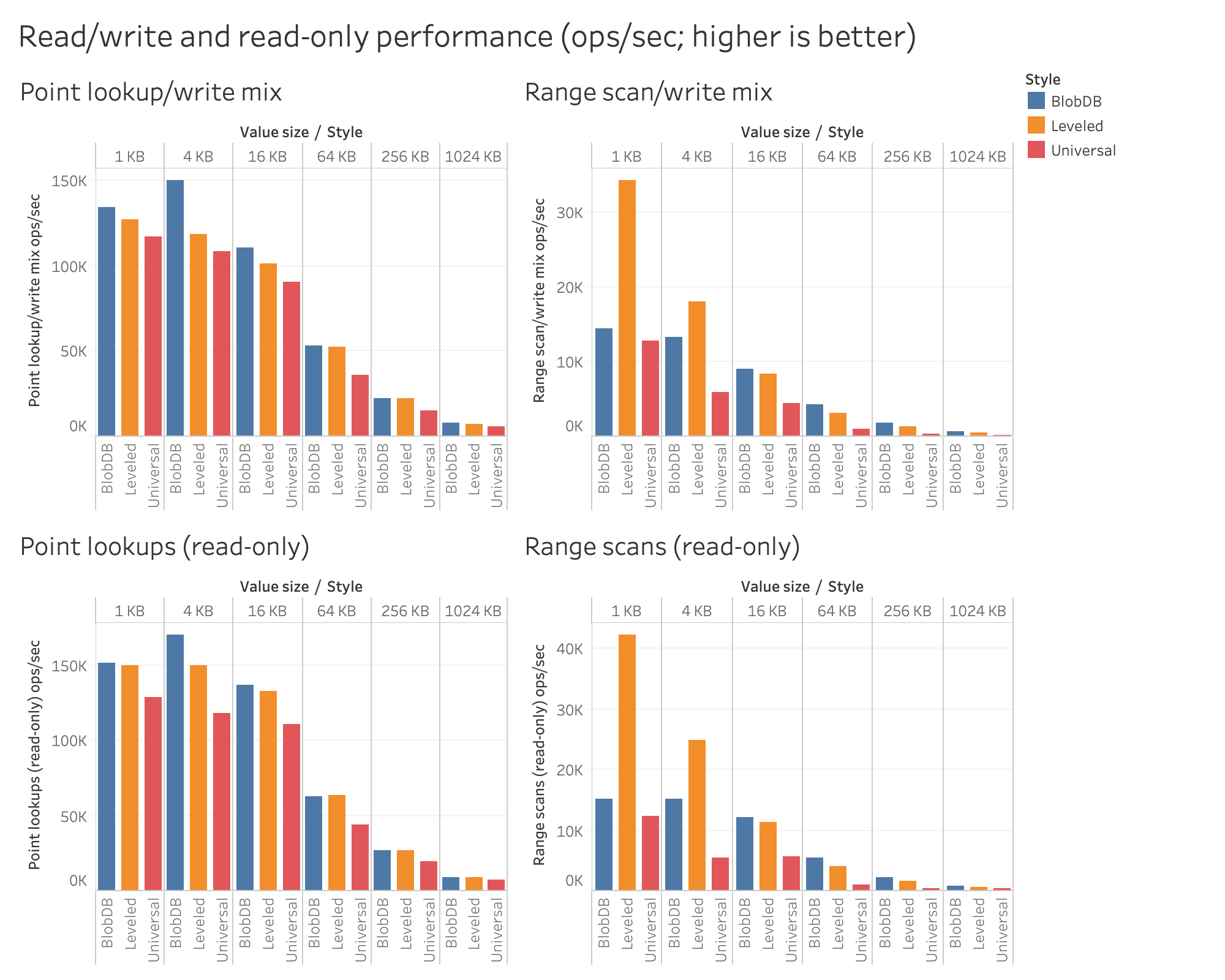 To compare the write performance of the new BlobDB with the legacy implementation, we ran two versions of the first (single-threaded random write) stage of the initial load benchmark using 1 KB values: one with WAL disabled, and one with WAL enabled. The new implementation completed the load 4.6x faster than the old one without WAL, and 2.3x faster with WAL.

There are a few remaining features that are not yet supported by the new BlobDB. The most important one is Merge (and the related GetMergeOperands API); in addition, we don’t currently support the EventListener interface, the GetLiveFilesMetaData and GetColumnFamilyMetaData APIs, secondary instances, and ingestion of blob files. We will continue to work on closing this gap.

We also have further plans when it comes to performance. These include optimizing garbage collection, introducing a dedicated cache for blobs, improving iterator and MultiGet performance, and evolving the blob file format amongst others.