This feature is meant for cases where the DB is located on remote storage or cloud storage. The non-volatile cache is officially referred to in RocksDB as the SecondaryCache. By maintaining a SecondaryCache that’s an order of magnitude larger than DRAM, fewer reads would be required from remote storage, thus reducing read latency as well as network bandwidth consumption.

From the user point of view, the local flash cache will support the following requirements - 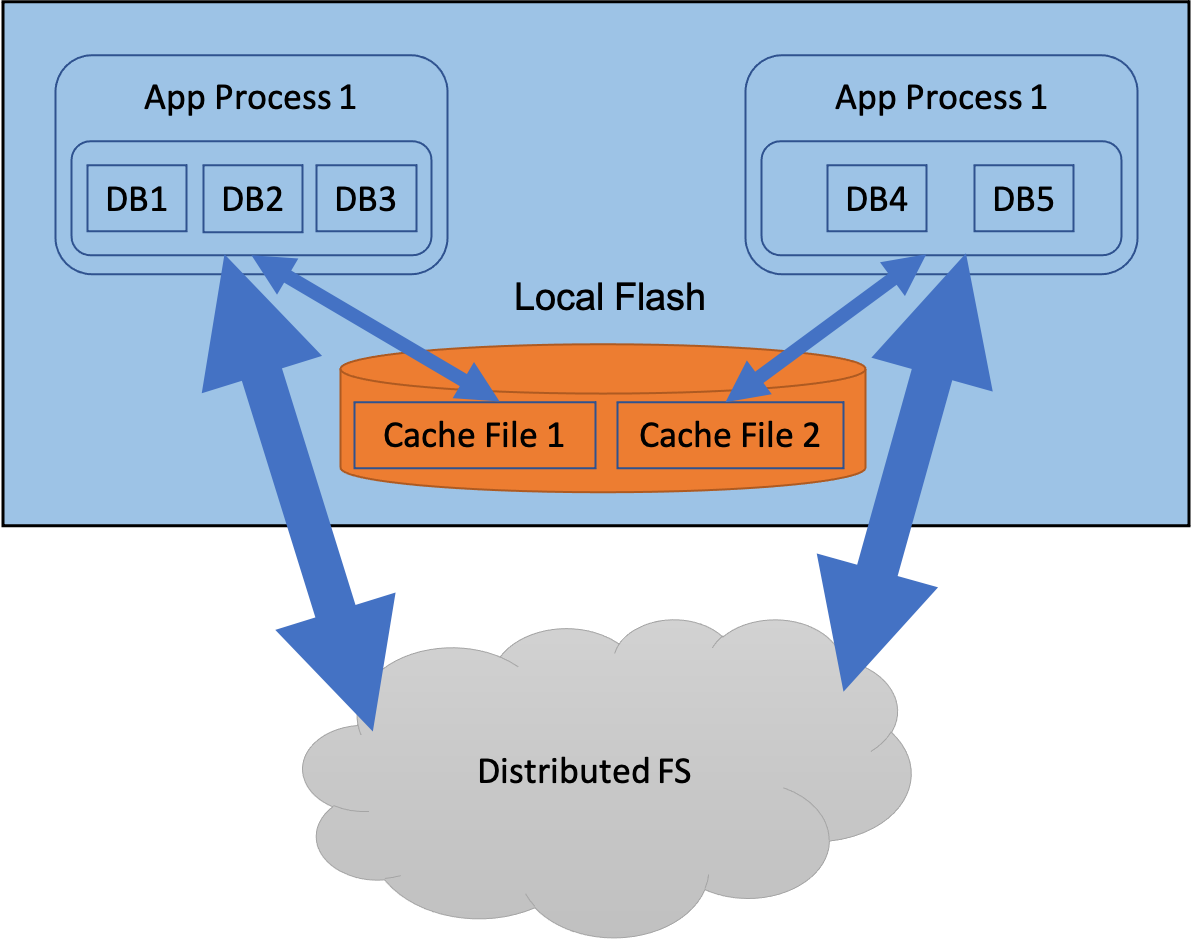 We decided to make the secondary cache transparent to the rest of RocksDB code by hiding it behind the block cache. A key issue that we needed to address was the allocation and ownership of memory of the cached items - insertion into the secondary cache may require that memory be allocated by the same. This means that parts of the cached object that can be transferred to the secondary cache needs to be copied out (referred to as unpacking), and on a lookup the data stored in the secondary cache needs to be provided to the object constructor (referred to as packing). For RocksDB cached objects such as data blocks, index and filter blocks, and compression dictionaries, unpacking involves copying out the raw uncompressed BlockContents of the block, and packing involves constructing the corresponding block/index/filter/dictionary object using the raw uncompressed data.

Another alternative we considered was the existing PersistentCache interface. However, we decided to not pursue it and eventually deprecate it for the following reasons -

The interface between RocksDB’s block cache and the secondary cache is designed to allow pluggable implementations. For FB internal usage, we plan to use Cachelib with a wrapper to provide the plug-in implementation and use folly and other fbcode libraries, which cannot be used directly by RocksDB, to efficiently implement the cache operations. The following diagrams show the flow of insertion and lookup of a block.

An item in the secondary cache is referenced by a SecondaryCacheHandle. The handle may not be immediately ready or have a valid value. The caller can call IsReady() to determine if its ready, and can call Wait() in order to block until it becomes ready. The caller must call Value() after it becomes ready to determine if the item was successfully read. Value() must return nullptr on failure.

The user of the secondary cache (for example, BlockBasedTableReader indirectly through LRUCache) must implement the callbacks defined in CacheItemHelper, in order to facilitate the unpacking/packing of objects for saving to and restoring from the secondary cache. The CreateCallback must be implemented to construct a cacheable object from the raw data in secondary cache.

The secondary cache provider must provide a concrete implementation of the SecondaryCache abstract class.

The initial RocksDB support for the secondary cache has been merged into the main branch, and will be available in the 6.21 release. This includes providing a way for the user to configure a secondary cache when instantiating RocksDB’s LRU cache (volatile block cache), spilling blocks evicted from the LRU cache to the flash cache, promoting a block read from the SecondaryCache to the LRU cache, update tools such as cache_bench and db_bench to specify a flash cache. The relevant PRs are #8271, #8191, and #8312.

We prototyped an end-to-end solution, with the above PRs as well as a Cachelib based implementation of the SecondaryCache. We ran a mixgraph benchmark to simulate a realistic read/write workload. The results showed a 15% gain with the local flash cache over no local cache, and a ~25-30% reduction in network reads with a corresponding decrease in cache misses. 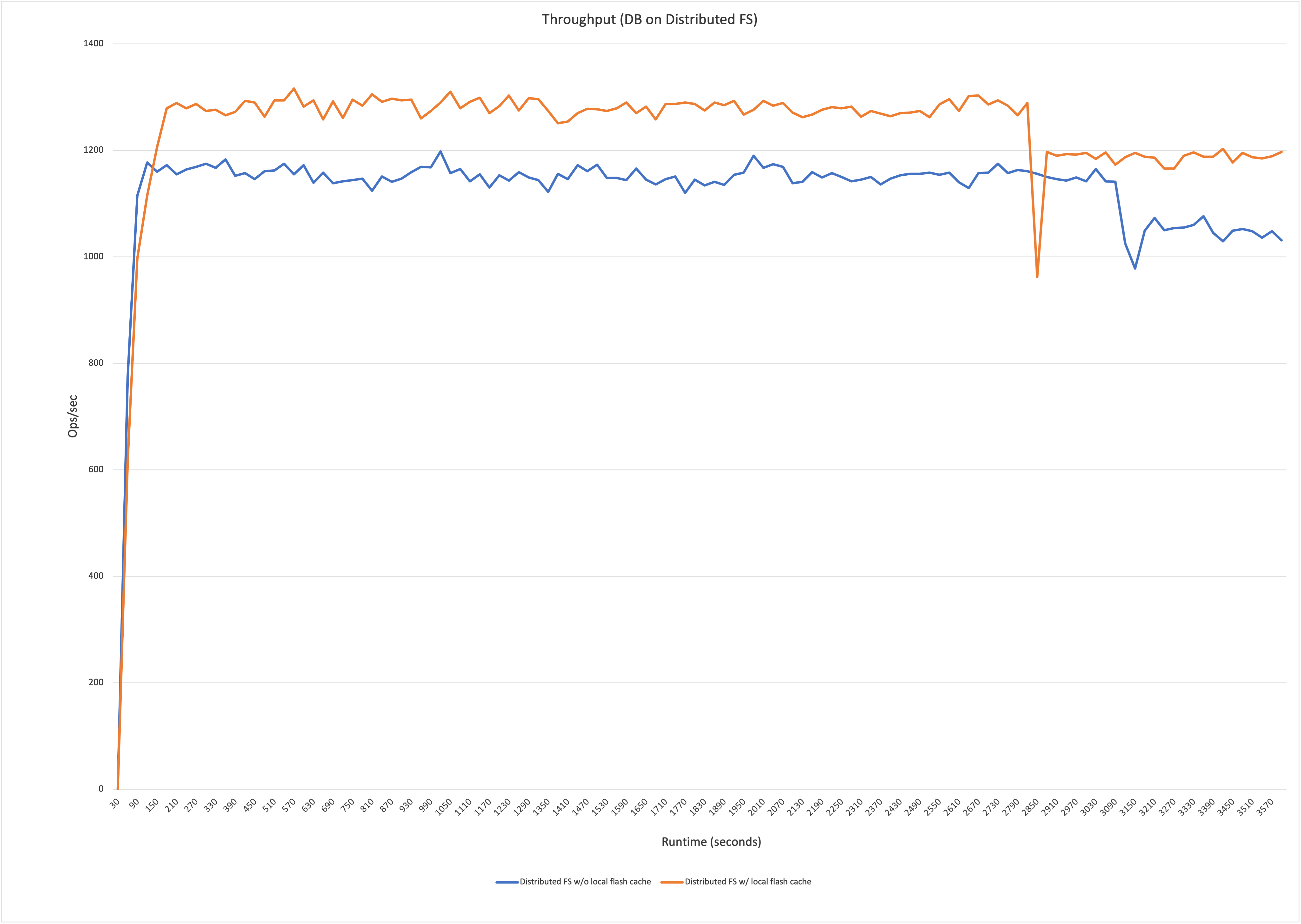 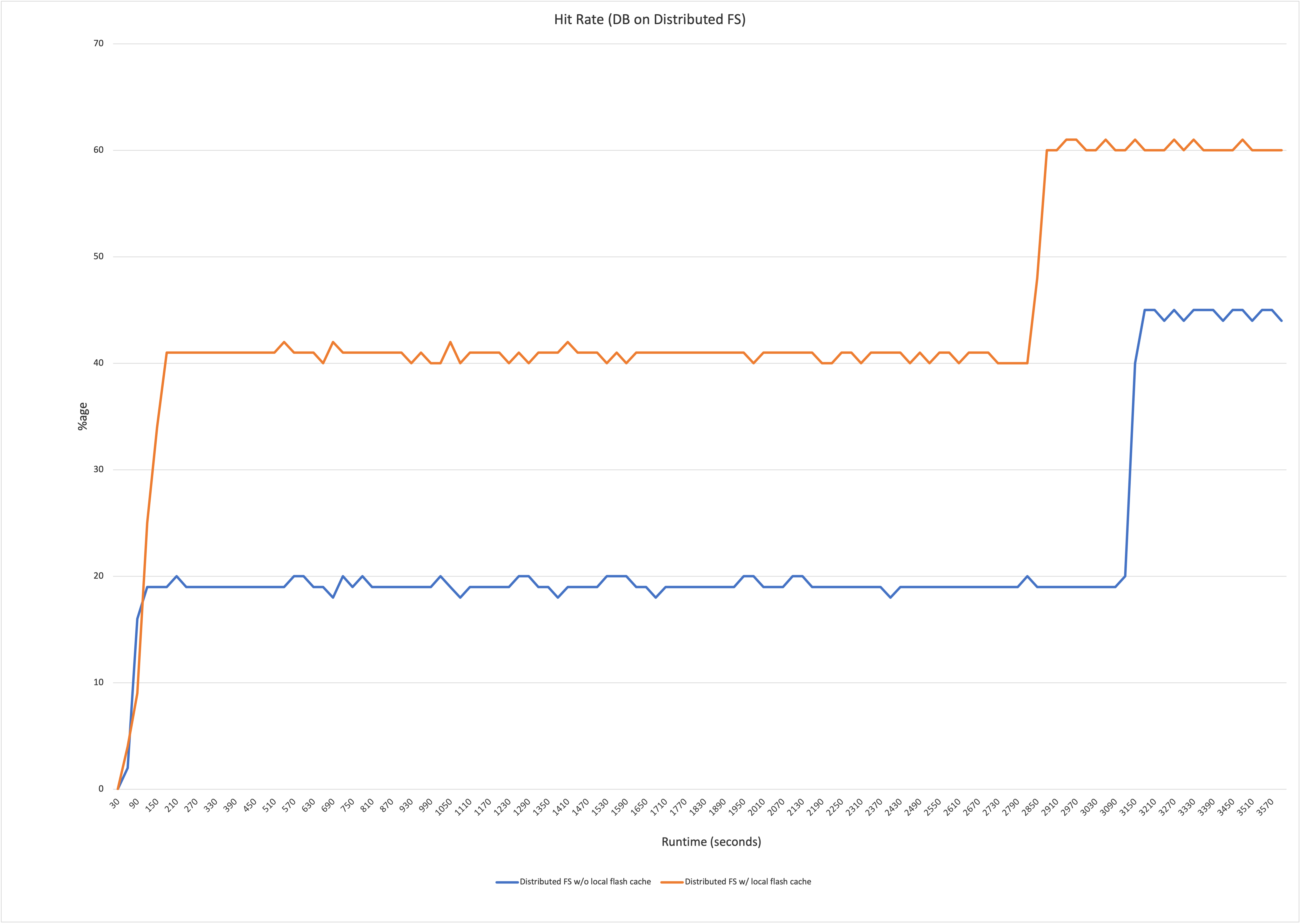 In the short term, we plan to do the following in order to fully integrate the SecondaryCache with RocksDB -

Longer term, we plan to deploy this in production at Facebook.

We are hoping for a community contribution of a secondary cache implementation, which would make this feature usable by the broader RocksDB userbase. If you are interested in contributing, please reach out to us in this issue.